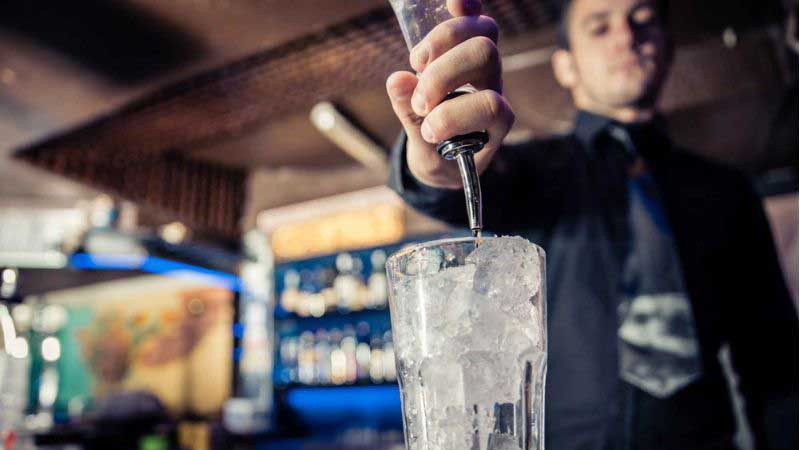 Bartending can be a really fun job, but it’s certainly not an easy one. Bartenders are responsible for keeping large numbers of people happy, while trying to ensure they don’t over-serve them. Bartenders are also under a lot of pressure from management to make the most amount of money in the shortest amount of time. Because of this, some bartenders will employ sneaky tricks to make you unknowingly spend more money. If you’re aware of these subtle tricks, you’ll be able to save money and avoid them!

Some bartenders will fill your glass with a large amount of ice so that they can put less alcohol in the glass. So even though your drink might taste super strong, it actually has less alcohol in it than a standard drink would.

If you don’t specify the brand of alcohol you’d like in your drink, some bartenders will purposefully pour you a top-shelf brand. They assume because you didn’t specify, they can get away with charging you a higher price.

This is the oldest trick in the book, but it can be quite hard to detect! If you order a drink on the rocks, some bartenders will add a little water to the glass so that they can save on alcohol. With cheaper alcohols, it can be hard to detect if a drink has been watered down. Although this is an illegal alcohol practice, many bars still get away with it.

Many bars will give patrons thick-bottomed glasses with slightly darker glass. This obscures how much alcohol is actually in the glass so that they can pour you less and save money.

Some bartenders will add less soda or other mix to a drink to make the drink seem as though it is really strong. In reality, the drink just tastes strong because there is less mix to mask the taste of the alcohol.

You’re probably pretty familiar with the peanuts, pretzels, and other salty snacks always available on the bar rail. When you indulge in these salty snacks, it makes you thirstier. And when you’re thirsty, you’re inclined to buy another drink.

Did you know that some bartenders will drop alcohol into straws before serving drinks? This tricks the patron into thinking their drink is much stronger than it actually is.

You’ve probably seen bartenders do those fancy maneuvers where they pour the alcohol into a glass from a far distance. Although this tricks the eye into thinking a lot of alcohol has gone into the glass, it’s really just the standard amount.

Many bartenders will use martini shakers or shot glasses to measure the alcohol going into a drink. However, be warned that some bars will glue objects to the inside of these vessels (which are usually stainless steel and thus, not see-through) to take up room inside the glass and pour you less alcohol.

This is probably one of the worst tricks some bars try to get away with. Sometimes, managers will pour a cheaper alcohol into a more expensive brand’s bottle. Unless you’re a real alcohol connoisseur, it can be extremely tough to notice.

Many bars and restaurants have automatic gratuities built into the bill. If a server or bartender fails to mention this little tidbit, it may lead to you tipping them twice.

Similar to the trick mentioned in #7, some bartenders will soak the rims of glasses in alcohol. This is just one more trick to make your drink appear much stronger than it actually is.