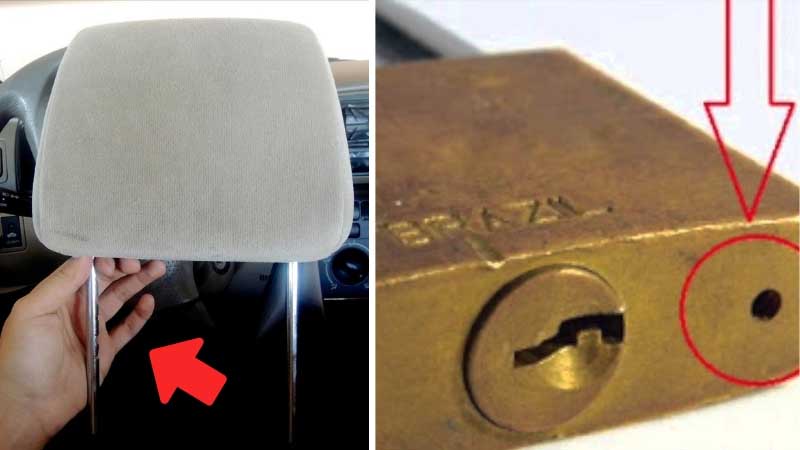 Have you ever looked at an everyday, basic object and wondered why it had a specific detail? When it comes to basic, utilitarian objects, every aspect of them was designed to serve a certain purpose. This knowledge was either never known, or got lost throughout the decades. But fortunately, we’re here to education you on 15 everyday objects with hidden features or uses!

Have you ever wondered why many pen caps have a small hole in the top? When pens began being manufactured, companies realized that pen caps could pose as huge choking hazards for children. They designed caps with a hole in the top so that if the cap was swallowed, children would still be able to pass air through.

The majority of soda can tabs have a hole in the middle of them. This isn’t so you can fit your finger underneath, but to use as a placeholder for your straw!

If you look at your vehicle’s gas light, there should be an arrow beside the gas pump icon. This arrow is to remind the driver which side the gas tank is on.

We’re all familiar with the wide margins on lined sheets of paper. Did you know that the margins were originally developed to protect what was on the paper? Since mice and rats used to be extremely common in people’s houses, the margins were meant to protect the documents from chewing pests.

The long neck seen on glass beer and soda bottles was actually designed to encourage the drinker to hold the bottle by the neck. That way, the heat generated from their hand wouldn’t warm up the liquid in the bottle.

If your pot handles have a hole in the end, it’s not for decoration. This hole is actually meant to serve as a spoon holder!

Have you ever wondered why your jeans have a fifth, extremely small pocket that’s far too small to store anything in? Well, this pocket was originally designed to house pocket watches!

If your pasta ladle has a hole in the center, this is because that hole actually measures the appropriate serving size for spaghetti!

While wooden hangers look more stylish than plastic or metal ones, that isn’t actually their intended purpose. Original wooden hangers were made from cedar, as cedar is a natural pest repellant (aka less chance of moths chewing at your clothing).

If a padlock has a tiny hole beside the lock mechanism, it’s so that water can pass through the hole and drain out if the lock becomes exposed to water.

You know those small, ribbed ketchup containers you get at fast food restaurants? Well, those ribs are meant to be pulled outward so that you have an expandable container that can house a lot more sauce.

You may have bought a piece of clothing that comes with extra buttons and a tiny patch of fabric. While this piece of fabric can be used for patching a hole, its intended purpose is for testing cleaning products on so that you don’t ruin the entire garment.

Those odd-shaped Chinese takeout containers actually serve a genius purpose. When you get your food home, you’re supposed to unfold the sides to have an instant paper plate that your food is already sitting on.

The removable headrests in your car are actually an important survival tool. If you ever become trapped in your vehicle, you could remove the headrest and use the two metal prods to smash out a window.